Hendrick Motorsports decided a change atop the pit box could be what this team needs to kick it into gear. After just 21 races, Kevin Meendering has been replaced as Johnson’s crew chief by Cliff Daniels.

Previously serving as a race engineer, the move is a step up for Daniels. Meendering will remain with Hendrick Motorsports in a senior competition role.

“We have to act now,” Johnson told NASCAR.com. “We don’t have any time to waste.”

While Sunday’s Go Bowling at the Glen at Watkins Glen International will be Daniels’ first race as a crew chief, he and Johnson do have some familiarity with one another.

Daniels was a race engineer under Chad Knaus during Johnson’s 2016 championship season. Knaus was moved to the No. 24 team with William Byron prior to the 2019 season. In their 17 seasons (2002-18) together, Johnson and Knaus won seven championships, including five straight from 2006-10.

This built-in familiarity should help the No. 48 team, but they need to hit the ground running. Currently on the wrong side of the playoff cutline, Johnson has three top-five finishes and an average finish of 15.095 in 2019.

Amid a career-long winless streak, a trip to Watkins Glen probably wasn’t exactly what Johnson was looking for. In 17 starts at the road course, he has yet to record a win and has an average finish of 17.059.

The Go Bowling at the Glen will take place at 3:00PM ET on Sunday, August 4. You can catch the action on NBCSN.

Hamlin was strong throughout the afternoon and finished in the top-five of all three stages in Sunday’s Gander RV 400.

Seeking his first victory since the O’Reilly Auto Parts 500 at Texas Motor Speedway in March, Hamlin held off teammates Erik Jones and Martin Truex Jr. in overtime to seal the deal in this one.

The win was the third of the season for the No. 11 Joe Gibbs Racing Toyota Camry.

Sitting fourth in the driver standings, 2019 is shaping up to be Hamlin’s best shot at a title since 2014.

“I feel as long as we keep putting the effort in what we’re doing, I have as good a shot as any,” he said.

He is also driving with plenty of confidence.

“We’re running our best right now,” he glowed. “There’s no doubt about it.”

The numbers back up his statement. Sunday marked three consecutive-top five finishes for the 38-year-old and his 10.048 average finish speaks to his consistency.

The Monster Energy NASCAR Cup Series (MENCS) next heads to Watkins Glen International for the Go Bowling at the Glen on Sunday, August 4. You can catch the action on NBCSN at 3:00PM ET.

In 13 career starts at the 3.4-mile road course, Hamlin has one win, three top-five and six top-ten finishes. 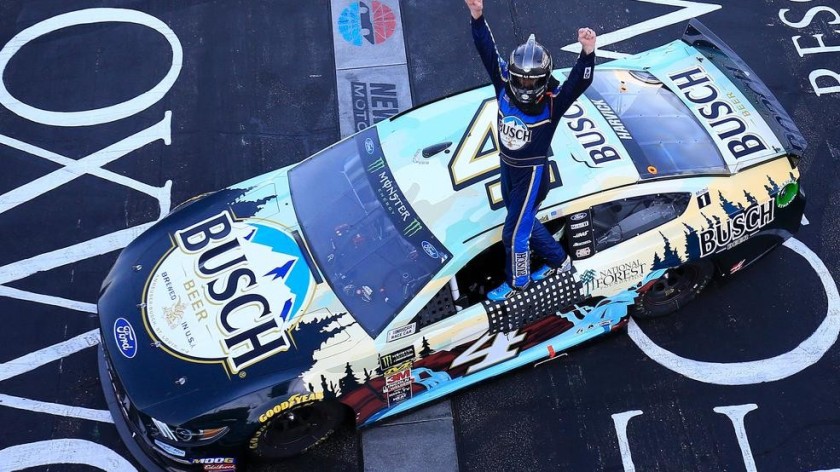 Loudon, NH – The drought is over!

For the first time since the AAA Texas 500 on November 4, 2018, a Stewart Haas Racing driver visited Victory Lane.

“We’ve run well enough a few times this year to win, but we’ve just made mistakes,” Harvick said post-race. “To finally battle and get over that hump is a great day for everybody at SHR and everybody on the No. 4 car.”

One of just three drivers to finish in the top-10 in all three stages – the other two being Kyle Busch and Denny Hamlin – Harvick gained 46 points on Sunday and has a 22-point lead over Hamlin for third-place in the driver standings.

While his 11th-place finish doesn’t jump off the page, Aric Almirola added to SHR’s strong day.

The winner of Stage 2, Almirola recorded 44 points on the day, trailing only Harvick and Kyle Busch.

When the caution flag waved late in the second stage, Almirola and crew chief John Klausmeier were faced with an interesting dilemma: Go for the stage points or play it safe with an eye on possibly winning the race.

“It’s kind of a double-edged sword when the caution comes out that late in the stage,” the driver of the No. 10 said. “We chose to score stage points and that paid off. We won the stage, but in the end, we got behind and couldn’t recover from track position.”

Finally free from the shackles of being winless, SHR will look to keep their success going in the Gander RV 400 at Pocono Raceway on July 28.

In 83 combined starts at “The Tricky Triangle,” the current stable of SHR Mustangs have yet to win a race. 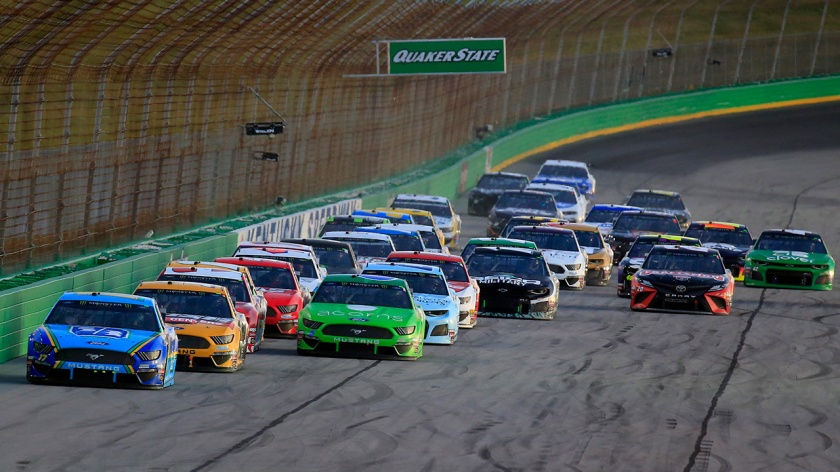 Sparta, KY – For the fourth time this season, Erik Jones was able to guide his No. 20 Joe Gibbs Racing Toyota Camry to a third-place finish in Saturday’s Quaker State 400 at Kentucky Speedway. After a rough stretch, the 23-year-old now has top-ten finishes in four of the last six races.

With all the rumors circulating about how he and Christopher Bell fit into the picture at JGR, Jones has done a good job of quieting the noise.

Qualifying 21st with a time of 29.821 seconds, Jones was able to move up to second-place by the end of Stage 2.

Things really got interesting when Bubba Wallace brought out the final caution of the night on lap 261. Utilizing the green-white-checkered finish, Jones dove to the bottom of the track and briefly took the lead.

In perhaps the most exciting finish of the 2019 Monster Energy NASCAR Cup Series (MENCS) season, the Busch brothers were able to pass Jones up high in turn 3.

“I had two choices there going into 3 and 4,” Jones recalled. “I knew they were probably going to slide up, so I was going to try to run to the bottom and make a run on them, but they didn’t slide up enough, and I was tight and couldn’t quite get the run I needed to.”

While he would have liked the ending to play out differently, Saturday still produced 43 points for the Byron, Michigan native. Currently holding a two-point lead over Ryan Newman for the final playoff spot, each point is critical for the No. 20 team.

“We built ourselves a big deficit through some misfortune and bad luck, and we’re digging out of it now,” Jones said about his team’s standing.

“Getting back on the good side of it (the playoff cutline) is a good start, we just need to keep it rolling and hopefully get a win here soon.”

If Jones is going to win a race to secure his spot in the postseason, he will have to do it at a track he has never won at before. His only Cup Series win came in the 2018 Coke Zero Sugar 400 at Daytona International Speedway.

The next opportunity for Jones will come on Sunday as NASCAR heads to New Hampshire Motor Speedway for the Foxwoods Resort Casino 301.

In three career starts at Loudon, Jones has one top-10 finish. 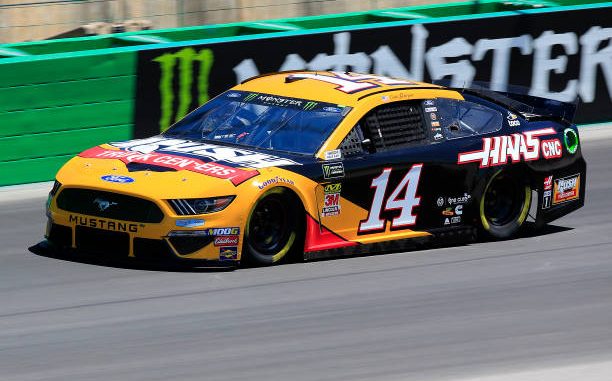 Starting seventh, Bowyer would pilot his No. 14 Ford Mustang to a sixth-place finish.

Stage 1 was the roughest of the night for the Emporia, Kansas native. He reported that his car was a little tight and he quickly dropped to 14th. Pitting under green on lap 41, Bowyer would drop a lap behind the leaders. A caution came out on lap 48 and he took advantage of the wave-around to return to the lead lap. At the end of the first 80 laps, Bowyer crossed the line in 18th.

The Monster Energy NASCAR Cup Series (MENCS) veteran would begin to show progress in Stage 2. Due to his late stop in the first stage, Bowyer was able to start the second segment in second-place. He was able to finish the stage in fifth-place and picked up six important bonus points.

This was very similar to how the final stage would go. Holding a lead over eventual winner Kurt Busch, Bowyer elected to pit on lap 206. A caution in the final laps led to an exciting green-white-checkered finish, Bowyer could climb up to fifth and ultimately finished in sixth.

All in all, Bowyer picked up 37 points on the night. He is in 14th-place in the driver standings, eight points above the playoff cutline.

“It was a positive night for us,” Bowyer sounded. “It didn’t start out well, but we did a good job of working together, staying in it and not giving up.

We needed a solid finish and we got that and got some positive mojo back with our team and we will build on it.”

Building off Saturday’s success will be key for the No. 14 team. He is tied in the point standings with Jimmie Johnson, and Erik Jones, Ryan Newman and Daniel Suarez are all within 12 points of the duo.

Bowyer will look to get some separation in Sunday’s Foxwoods Resort Casino 301 at New Hampshire Motor Speedway.

In 25 career starts at the track, Bowyer has two wins and nine top-10 finishes.